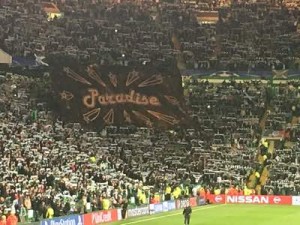 BMD have been set out to be our kryptonite. Pressing our backline and our attackers, giving us little time to move the ball forward, forcing us into bad plays because they know they can beat our midfield man for man. Bitton and Rogix have been horrible. Brown has it all to do. On the ball we've been terrible, forcing things when we shouldn't be and being far too casual at times.
I think Rodgers needs to bring Forrest and Sinclair back a bit, maybe even go to a 3-5-2, bring Lustig to RB and get Simunovic on for Forrest. We are giving BMD far too much space out wide and putting too much pressure on Sviatchenko and Toure to make crucial plays.
Defend wider, pressure their midfield more aggressively, and control the ball better. We can win this if we take a chance or two, but we need to really tighten up in our half here. CalgaryBhoy, Yesterday at 8:41 PM

We have been dominated by a team that can pass the pall as good as Man City and Barcelona and with more pace. Stretched left and right and extremely fortunate not to be two goals down. Hope Sinclairs miss doesnt come back to haunt us. Midfield anonymous, Brown looking out of puff, Bitton sloppy in passing. Rogic muscled out....who do we turn to? Not many options on bench for midfield that will put any confidence in me...straighttalker, Yesterday at 8:42 PM

They were getting the ball and bang the pass is gone first time....we get the ball...touch it 3 or 4 times wait till the pass is no longer an option then pass it back to defence then pass it along the line once or twice then pass it to gordon who then humps up the park to the germans.
Any pressure on our team and players and we just cant cope...even in the spl anyone has a go and we have problems. wulliebad, Yesterday at 9:30 PM

Credit to their fans, what a showing obafgkmlt, Yesterday at 9:39 PM

Totally outclassed from start to finish. Men against bhoys. Depressing.Markybhoy, Yesterday at 9:39 PM

Well done Gladbach, they are a good side. Every players' touch seemed that level above ours and they passed fast and crisp.
Lesson learned. We continue on! mark82, Yesterday at 9:40 PM

They played exceptionally well. A team built on everyone having excellent technical ability ; every touch and pass was on the money. Got their tactics spot on , outclassed. jpr21, Yesterday at 9:43 PM

Fair play to them what a performance,
Did the fact they switched to a back 4 suprise us? who knows,
We can play much MUCH better than that. A Man, Yesterday at 9:44 PM

We were outplayed tonite in every department. BMG were a class above. That is the level we are at. Top team in Scotland but this level of football is a different planet. We move on from tonite. Group stage qualification is our TOP level at present Dubliner1, Yesterday at 10:02 PM

Credit where it's due to Gladbach, we took 3 touches to their 1 to move the ball on. At this level it shows.RegiBlinker, Yesterday at 10:03 PM

BMG got the tactics spot on, if they get third wouldn't be surprised if they won the Europa. Felt for big Toure, he was solid except for the two mistakes and looked injured in the last part of the game. DM needed although they do not grow on trees for the level and budget we are after Briggs_bhoy, Yesterday at 11:21 PM

thier movement and passing was great and id say not many teams have come to cp and played as well as them ,they were strong in the tackle and won most of the 50 50s ,we have stepped up a level ourselves ,when we pressed we anticipated the next move and pressed that area,i liked that ,but we needed another man in midfield to help out ,bitton is not a deffensive mid ,and does not have the pace or energy for this type of pressing play . joemc, Yesterday at 11:46 PM

Briggs_bhoy said: ↑ BMG got the tactics spot on
100% agree. I was very surprised 'bout the way Borussia played tbh. But Schubert was probably acting from necessity with four main players missing.
I didn't see Celtic playing too poorly, esp. Kolo. He was holding the defence together while also having to try to feed central midfield, which was only partly existent. But 4, 5 players were sub standard and in CL you get punished. Borussia1975, Yesterday at 11:52 PM

Outplayed from the start. KTs first game where I've thought he looked beat to every ball and low in confidence, both goals individual errors from kolo, midfield not winning any second balls and although there wasn't much going on up front, any chance scotty or dembele got the ball it just wasn't sticking.
Germans deserved the win, we need to regroup and dig deep for the next game over there, they've big players coming back. If we can keep them out an oul penalty win will do nicely haha
I know it's a negative post but I really do believe if we find the intensity we got at man shitty with well come up with the goods! Belfast_Bhoy, Yesterday at 9:42 PM

Briggs_bhoy said: ↑
BMG got the tactics spot on
100% agree. I was very surprised 'bout the way Borussia played tbh. But Schubert was probably acting from necessity with four main players missing.
I didn't see Celtic playing too poorly, esp. Kolo. He was holding the defence together while also having to try to feed central midfield, which was only partly existent. But 4, 5 players were sub standard and in CL you get punished.Borussia1975, Yesterday at 11:52 PM

Have to say I thought that was as good a team performance since Villarreal in the UEFA Cup, Riquelme era.
Kept the ball well and kept it under pressure(had a moment 1st half where they played from deep in the right back area to the edge of our box. Beating our pressing at every turn).Miles in front of us in terms of technique, seem to string passes together at will. We struggled to make 5 passes.
You could say we underperformed, but it was Gladbach that made us play that way. They dominated the midfield area and dictated how we attacked. Boxed us out in advanced positions, forced the play back and gave us no room to play through the lines(prime example was when in the 2nd half to counter Brown dropping deep they played a line of 3 between our defence and midfield. Challenging our defenders to find the gap. 2nd goal came from such a situation). The only occasion we managed to play between them, was when Rogic played in Sinclair just before half time. It was a flash of the quality we can produce. Unfortunately, we couldn't reproduce that quality at all for the rest of the game. Lustig and Tierney were starved of options in front of them, more often than not playing backwards or forcing the ball towards Dembele. Sinclair and Forrest were ineffective. Dembele was handled well by Elvedi and Vestergaard, when he did get free, it was the Dembele of earlier in the season and not of previous weeks.
Toure made the mistakes but in all honesty, as a group every player was off the pace. HoopswithPride, Yesterday at 11:59 PM

They weren't miles better but they were superior and sadly we never turned up. They were playing wee 1-2s and triangles all over the place, I hope we learn something from that because frankly that movement, passing and precision is what I want from Celtic.
Beaten by a better and much richer team, annoying but you have to accept it in the Champions League. Their fans were absolute class, best away support at Parkhead for years. Met a few Germans in town and they were all sound, none of them were expecting a win so sometimes you can't begrudge another team some glory. Still early days under Rodgers and after the last couple of years we shouldn't be expecting to win every European game by some divine right, we have to earn every point.AwesomeCaz, Today at 12:06 AM

Celtic_renard said: ↑
Just got in. Don't know why everyone seems to be saying monchengladbach were class. They were decent and that's it. We were just very below par. There wasn't a moment in the game where I was sitting there thinking "wow they're a top class side."
They were good, how well they pressed and kept their shape, a very good 442 system that they adapted as the game went on, their captain bossed our midfield and they played smart. Certainly nothing special but a level above us that we need to be able to raise to. We got taught a lesson. CookieMonster, Today at 1:15 AM

The Afterman said: ↑ They do seem a good bunch though!(Anmerkung: Gemeint sind die Borussia-Fans)
up there with the best at Celtic Park. Crow, Today at 7:40 AM

I'm surprised that some didn't rate them. I thought they were absolutely top class..
Most team's have a soft centre, and weaknesses... Even the very best, where you usually still get a sniff. They had none, with 4 and even more out long term..
Up top, quick, and a threat everytime. Midfield absolutely bossed us, and they were creative, plus strong (in the challenge) and dominant. Defensively sound and untroubled, never really caught out (bar a world class ball), and a keeper who claimed everything and was top notch with his distribution..
They had us sussed and we had no comeback. How many side's have done that to us in the Champions League? Mcguire1, Today at 9:23 AM

Respect to the Opponent
Discussion in 'Celtic Chat' started by \o/, Today at 8:30 AM.

Got to say, Gladbach impressed the hell out of me. 4 top players missing and the way they went about the game was outstanding... not only were they a very good team, impressive passing and movement, they were fair.
No daft diving about, hard but fair tackling and their fans were outstanding. Everything about the clubs impressed me, from their social media to the team on the pitch.
We were well outplayed, on and off the pitch. Ultimately we were our own downfall but Gladbach's earned a whole lot of respect off of me for one. If we don't manage to salvage the campaign, I hope they pip City to second place. \o/, Today at 8:30 AM

LloydsGamble said: ↑
Yep, was one of the best perfromances from an away team I've seen at Celtic Park. That's including lot's of big names including Barca, Milan, Man City & Utd.
Very impressive TEAM with a capital T. Scary that was them missing 4 players. Surprised City beat them 4-0 in Manchester on that showing.
Would agree with this, most teams buckle at Celtic Park but they were a class above us last night.
Antwort:
Lets not forget even with players missing it was still full of top internationalists and a 2014 world cup winner! They've qualified for CL the past two seasons which must be extremely difficult in their league.
jordan_, Today at 12:00 PM 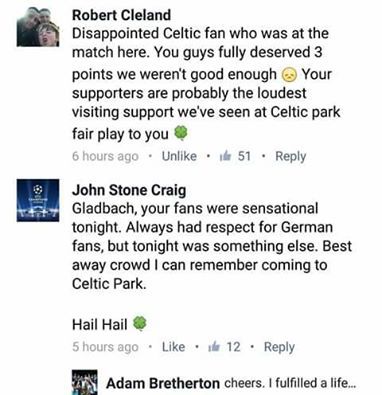